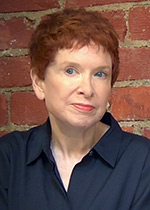 Judith is one half of a husband/wife team which does Ties within the Star Trek Universe.

Previously, they acted as staff writers and supervising producers in the second and third seasons of Sir Arthur Conan Doyle's The Lost World, and wrote episodes of Batman: The Animated Series, Beyond Reality, Catwalk, The Hitchhiker, and John Woo's Once a Thief.

As executive story editors on the short-lived but highly-influential Phantom 2040, they contributed the show's unique creative direction, developing the writers' bible and scripting many key episodes (including the two-part pilot, Generation Unto Generation).


Works in the WWEnd Database

No videos currently exist for this author. Be the first to submit a YouTube