An error has occurred connecting to the RSS Feed. (x64) Approaching Oblivion | WWEnd 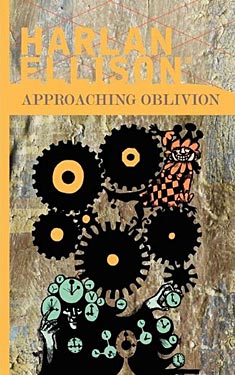 The New York Times called him "relentlessly honest" and then used him as the subject of its famous Sunday Acrostic. People Magizine said there was no one like him, then cursed him for preventing easy sleep.

But in these stories Harlan Ellison outdoes himself, rampaging like a mad thing through love ("Cold Friend", "Kiss of Fire", "Paulie Charmed the Sleeping Woman"), hate ("Knox", "Silent in Gehenna"), sex ("Catman", "Erotophobia"), lost childhood ("One Life, Furnished in Early Poverty") and into such bizarre subjects as the problems of blue-skinned, eleven-armed Yiddish aliens, what it's like to witness the end of the world and what happens on the day the planet Earth swallows Barbra Streisand.

Oh yeah, this one's a doozy!

Have you got a cover image that we don't have? Submit an alternate cover image for Approaching Oblivion here!