An error has occurred connecting to the RSS Feed. (x64) The Bookman | WWEnd 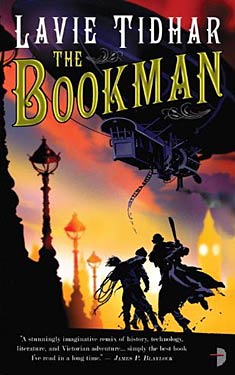 A masked terrorist has brought London to its knees -- there are bombs inside books, and nobody knows which ones. On the day of the launch of the first expedition to Mars, by giant cannon, he outdoes himself with an audacious attack.

For young poet Orphan, trapped in the screaming audience, it seems his destiny is entwined with that of the shadowy terrorist, but how? His quest to uncover the truth takes him from the hidden catacombs of London on the brink of revolution, through pirate-infested seas, to the mysterious island that may hold the secret to the origin not only of the shadowy Bookman, but of Orphan himself...

Like a steam-powered take on V for Vendetta, rich with satire and slashed through with automatons, giant lizards, pirates, airships and wild adventure. The Bookman is the first of a series.

Under Waterloo Bridge Gilgamesh slept
wrapped in darkness and the weak light of stars
his breath feeble in the fog:

He dreamt of Ur, and of fish,
slow-roasting on an open fire,
and the scent of spring
– L.T., The Epic of Gilgamesh

Orphan came down to see the old man by the Thames. The old man sat alone on the embankment under Waterloo Bridge, wrapped in a horse blanket, beside a small fire, a rod extending from his gloved hands into the dark waters of the river below. Orphan came stealthily, but the old man's blind eyes nevertheless followed his progress. Orphan sat down beside Gilgamesh on the hard stone floor and warmed his hands on the fire. In the distance, whale song rose around the setting sun.

For a while there was silence. Then, "Did you catch anything?" Orphan asked.

Gilgamesh sighed and shook his head. His long hair was matted into grey locks that made a dry rustling sound as they moved. "Change is unsparing," he said enigmatically.

Orphan echoed his sigh. "But did you catch anything?"

"If I had," Gilgamesh said reasonably, "it would have been roasting on the fire by now."

"I brought bread," Orphan said, and he reached into his bag and brought out, like a magician, a loaf of bread and a bottle of wine, both wrapped in newspaper, which he put down carefully on the ground beside them.

Instead of an answer Orphan uncorked the wine, allowing its aroma to escape into the cold air above the Thames.

Gilgamesh's brown fingers broke a piece of the bread and shoved it into his mouth, and he followed it by taking a swig of wine from the open bottle. "Château des Rêves," he said appreciatively, "now where would a young lad like you find a bottle like that?"

The old man turned his blind eyes on Orphan and slowly nodded. "Yes," he said, "but where did you steal it, young Orphan?"

"It's a long way to come, with a bottle of red wine," Gilgamesh said, as if reciting a half-forgotten poem. "As much as I appreciate the visit, I doubt you came all this way on a social call. So," the blind eyes held Orphan in their gaze, "what is it you want?"

Orphan smiled at that. "Tonight," he said, "is the night, I think."

"Indeed?" The eyes turned, the hands checked the anchored fishing-rod, returned to the bread. "Lucy?"

Gilgamesh smiled, but his face looked old and, for a moment, wistful. "But you are both so young…"

"I love her." It was said simply, with the honesty only the young possess. Gilgamesh rose, and surprised Orphan by hugging him. The old man felt frail in Orphan's arms. "Let's drink. For the two of you."

"Read me the paper," Gilgamesh said. They sat together, looking at the Thames.

Obligingly, Orphan reached for the stained newspaper. He scanned the small print, the ink already running, searching for an item of news to interest Gilgamesh. "Here," he said at last. He cleared his throat and read the title, which was: "Terrorist Gang Strikes Again!"

"Go on," Gilgamesh said, spraying him with crumbs of bread.

"Last night," read Orphan, "the notorious terrorist organisation known as the Persons from Porlock struck again at the very heart of the capital. Their target this time was none other than the famed playwright Oscar Wilde, who was engaged, by his own words, in a work of composition of the highest order when he heard an insistent knock on the door, followed by shouts from outside. Rising to see what the commotion was about – having, for reasons of his own, dismissed all his servants for the night – Wilde was confronted by several men dressed as clowns who shouted fragmented lines from Lear's A Book of Nonsense at him, enclosed him in a circle and danced around him until his mind, so he himself says, had been set awhirl with chaos. The Persons departed as suddenly as they had come, evading the police force that was already on its way to the scene. In his statement, a confused Wilde said the title of his new play was to be called The Importance of Being Something, but for the life of him he could no longer recall what that something was. "How long will this campaign of terror continue?" Wilde asked, and called for the Prime Minister's resignation. "This cannot go on," he said, "this is a violation of everything our country stands for." Prime Minister Moriarty's Office was not available for comment."

He finished, and all was quiet save for Gilgamesh's chuckle. "Was he really ‘engaged in a work of composition of the highest order'?" he said, "or was he entertaining the young Alfred Douglas? I suspect the Persons from Porlock wasted their time on this one. But you wouldn't know anything about that, would you?" he said.

Orphan glanced away and was silent. Again, Gilgamesh chuckled. He took another long swig on the bottle and said, "What else is there?"

"Moriarty to launch Martian space-probe," Orphan said, "ceremony to take place tomorrow at dusk. The probe will carry an Edison record containing the songs of birds and whales, as well as a small volume of Elizabeth Barrett Browning's Sonnets from the Portuguese."

Gilgamesh nodded approvingly. "Lucy is going to be there," Orphan said. "She has been doing the whale recordings for the past two months, and she was selected to put the record and the book into the probe at the ceremony." He grinned, trying to picture it. The Queen might be there!

"Whales are worth listening to," Gilgamesh said mildly, though his eyes twinkled. "Pray, continue."

Orphan continued. "Fresh fly supply for the Queen was halted temporarily on Tuesday due to suspicion of a contaminated source – most of her public appearances have been cancelled for the next week. The Byron simulacrum gave a poetry recital at the Royal Society…" he turned the page over, "oh, and rumours the Bookman is back in town."

Beside him, Gilgamesh had gone very still. "Says who?" he asked quietly.

"An unnamed source at the Metropolitan Police," Orphan said. "Why?"

Gilgamesh shook his head. "No one knows where the Bookman will strike. Not unless he chooses to make it known, for reasons of his own."

"I'm not sure I understand you," Orphan said patiently, "why would he do that?"

"As a warning, perhaps," Gilgamesh said, "to his next victim."

"The Bookman's only a myth," Orphan said. Beside him, Gilgamesh slowly smiled.

"A myth," he said. "Oh, Orphan. This is the time of myths. They are woven into the present like silk strands from the past, like a wire mesh from the future, creating an interlacing pattern, a grand design, a repeating motif. Don't dismiss myth, boy. And never, ever, dismiss the Bookman." And he touched his fingers to his blind eyes, and covered his face with his hands. Orphan knew he would speak no more that night.

That was how Orphan left him, there on the water's edge: an old man, hunched into an unmoving figure, like a pensive statue. Orphan never again saw him in life.

Who was Orphan and how had he come to inhabit that great city, the Capital of the Everlasting Empire, the seat of the royal family, the ancestral home of Les Lézards? His father was a Vespuccian sailor, his mother an enigma: both were dead, and had been so for many years. His skin was copper-red, his eyes...