An error has occurred connecting to the RSS Feed. (x64) Thunderbird | WWEnd 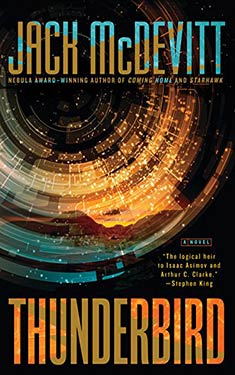 The Nebula Award-winning author of the Alex Benedict novels and the Priscilla Hutchins novels returns to the world of Ancient Shores in a startling and majestic epic.

A working stargate dating back more than ten thousand years has been discovered in North Dakota, on a Sioux reservation near Devils Lake. Travel through the gate currently leads to three equally mysterious destinations: (1) an apparently empty garden world, quickly dubbed Eden; (2) a strange maze of underground passageways; or (3) a space station with a view of a galaxy that appears to be the Milky Way.

The race to explore and claim the stargate quickly escalates, and those involved divide into opposing camps who view the teleportation technology either as an unprecedented opportunity for scientific research or a disastrous threat to national--if not planetary--security. In the middle of the maelstrom stands Sioux chairman James Walker. One thing is for certain: Questions about what the stargate means for humanity's role in the galaxy cannot be ignored.

Especially since travel through the stargate isn't necessarily only one way...

JERI TULLY WAS eight years old. Mentally, she was about three, and the experts cautioned her parents against hoping for any serious improvement. No one knew what had gone wrong with Jeri. There was no history of mental defects on either side of her family and no apparent cause. She had two younger brothers, both of whom were quite normal.

Her father was a border patrolman, her mother a former legal secretary who had given up all hope of a career when she followed her husband to Fort Moxie.

Jeri went to school in Walhalla, which conducted the only local special-education class. She enjoyed the school, where she made numerous friends and where everyone seemed to make a fuss over her. Mornings in the Tully household were underscored by Jeri's enthusiasm to get moving.

Walhalla was thirty-five miles away. The family had an arrangement with the school district, which was spread out over too vast an area to operate buses for the special-education kids: The Tullys provided their own transportation, and the district absorbed the expenses.

Jeri's mother had actually grown to enjoy the daily round-trip. The child loved to ride, and she was never happier than when in the car. The other half of the drive, when Mom was alone, served as a quiet time, when she could just watch the long fields roll by, or plug an audio book into the system.

Jeri's father worked the midnight shift that night, and his wife was waiting for him when he got home in the morning with French toast, bacon, and coffee. While they were at breakfast, an odd thing happened. For the only time in her life, Jeri wandered away from home. It seemed, later, that she had decided to go to school and, having no concept of distance, had begun walking.

Unseen by anyone except a two-year-old brother, she put on her overshoes and her coat, let herself out through the porch door, walked up to Route 11, and turned right. Her house was on the extreme western edge of town, so she got past the demolished Dairy Queen and across the interstate overpass within minutes. The temperature, which is exceedingly erratic in April, had fallen back into the teens.

Three-quarters of a mile outside Fort Moxie, Route 11 curves sharply south and almost immediately veers west again. Had the road been free of snow, Jeri would probably have stayed with the highway and been picked up within a few minutes. But a light snowfall had dusted the highway. She wasn't used to paying attention to details and, at the first bend, she walked straight off the road. When, a few minutes later, the snow got deeper, she angled right and got still farther away.

Jeri's parents had by then discovered she was missing. A frightened search was just getting started, but it was limited to within a block or so of her home.

Jim Stuyvesant, the editor and publisher of the Fort Moxie News, was on his way to the Roundhouse. Rumors that an apparition had come through from the other side were going to be denied that morning in a press conference, and Jim planned to be there. He was just west of town when he saw movement out on Josh McKenzie's land to his right: A small whirlwind was gliding back and forth in a curiously regular fashion. The wind phenomenon was a perfect whirlpool, narrow at the base, wide at the top. Usually, these things were blurred around the edges, and they floated erratically across the plain. But this one looked almost solid, and it moved methodically back and forth along a narrow track.

Stuyvesant pulled off the road and stopped to watch.

It was almost hypnotic. A stiff blast of air rocked the car, enough to blow the small whirlwind to pieces. But it remained intact.

Stuyvesant never traveled without his video camera, which he had used on several occasions to get material he'd subsequently sold to Ben at Ten or to one of the other local TV news shows. (He had, for example, got superb footage of the Thanksgiving Day pileup on I-29, and the blockade of imported beef at the border port by angry ranchers last summer.) The floater continued to glide back and forth in its slow, unwavering pattern. He turned on the camera, walked a few steps into the field, and started to record.

He used the zoom lens to get close and got a couple of minutes' worth before the whirlwind seemed to pause.

It started toward him.

It approached at a constant pace. There was something odd in its manner, something almost deliberate.

A sudden burst of wind out of the north ripped at his jacket but didn't seem to have any effect on the thing. Stuyvesant's instincts began to sound warnings, and he took a step back toward the car.

It stopped. Remained still in the middle of the field.

Amazing. As if it had responded to him.

He stood, uncertain how to proceed. It began to move again, laterally. It retreated a short distance, then came forward again to its previous position.

He watched it through the camera lens. The red indicator lamp glowed at the bottom of the picture.

You're waiting for me.

It approached again, and a sudden burst of wind tugged at his collar and his hair.

He took a step forward. And it retreated.

Like everyone else in the Fort Moxie area, Stuyvesant had been deluged with fantastic tales and theories since the Roundhouse had been uncovered, with its pathways to other worlds. Now, without prompting, he wondered whether a completely unknown type of life-form existed on the prairie and was revealing itself to him. He laughed at the idea. And began to wonder what he really believed.

It withdrew before him, matching his pace.

He kept going. The snow got deeper, filled his shoes, and froze his ankles.

It hovered before him. He hoped he was getting the effect on camera.

It whirled and glittered in the sun, maintaining its distance. He stopped, and it stopped. He started again, and it matched him.

Another car was slowing down, pulling off the highway. He wondered how he would explain this, and immediately visualized next week's headline in the News: MAD EDITOR PUT UNDER GUARD.

But it was a hunt without a point. The fields went on, all the way to Winnipeg. Far enough, he decided. "Sorry," he said, aloud. "This is as far as I go."

And the thing withdrew another sixty or so yards. And collapsed.

When it did, it revealed something dark lying in the snow.

That was the day Stuyvesant got religion.